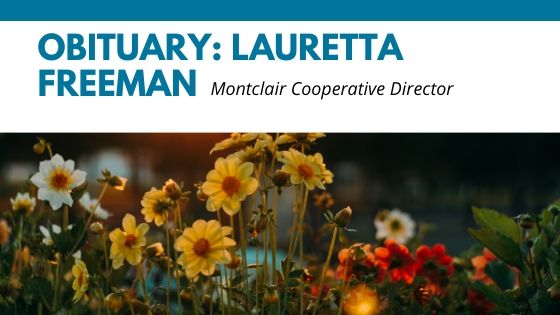 By ROBIN WOODS
For Montclair Local 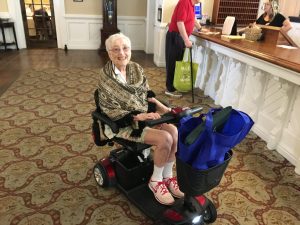 The Montclair educational community is mourning the passing of Lauretta Freeman, who was involved in the education of young children, creating curriculum guides and training teachers for generations before her death on March 24. She was 97.

Freeman was born on Dec. 24, 1922. She founded the Montclair Cooperative School, a place for progressive education from nursery through eighth grade, in 1963. She was a teacher and director there for 23 years.

On the school’s webpage, former students and colleagues shared tributes to her: “I probably first met Lauretta when I was three at an early childhood conference in California. My mom fondly reminded me of how much we liked one another from the start. I’m comforted by the fact that she was aware of how much she was and is appreciated,” writes Andrea Lee.

“I have known Lauretta probably from the very beginning, and I always looked up to her for her tireless involvement with our organization and bettering the lives of young children,” said Helen Muscato, executive director of the New Jersey Association for the Education of Young Children (NJNAEYC).

“Lauretta held many board positions in the state organization, and was particularly active in the local Essex-Hudson chapter, and was active until the day she passed. I even had a meeting with Lauretta within the last six months, even though her health was failing, to see how we could get more involvement in Essex and Hudson counties.

“She was also very active in getting-out-the-vote campaigns, maintained our lending library for countless years, and was a wonderful presence at our conferences. The early childhood education community has lost a leader in New Jersey, but her legacy will never be forgotten.”

Muscato and Essex-Hudson chapter representative Simone Taylor are discussing how they can best honor Freeman’s legacy. They are in the process of creating a scholarship fund in her name.

Sylvia Pfeffer met Freeman in 1974 after she graduated from Hunter College, also Freeman’s alma mater. Pfeffer worked at Montclair Cooperative School from 1974 until 1981, and was a business partner with Freeman.

“I spoke to her on the day that she died, and she was one of the most determined people I’ve ever met,” Pfeffer said. “I took her to all of her doctor’s appointments. She met all my negatives as a teacher and helped me to be more natural and less structured. Even though her health was failing, she wanted to attend NJNAEYC conferences and folk dance performances in Montclair and Clifton. She worked very hard and made a difference in the lives of teachers and children.”

Sharon Sandusky, former chairperson of the Senior Citizens Advisory Committee (SCAC), worked with Freeman, who was a member of the group. SCAC created a survey directed at seniors in 2013 that asked them how the township could assist them in staying in Montclair, now known as aging in place.

Freeman worked with SCAC until she was 91 and helped to create the annual Seniorama Program with other members of the committee.

“She was always out there, and co-produced TV34 Montclair’s ‘News and Views’ weekly show for four years,” Sandusky said. “We taped more than 100 shows, and Lauretta also helped with directing the shows and doing anything we needed. ‘News and Views’ featured guests who talked about issues that are important to seniors, from health to cooking and politics. She was also involved in activities at the Unitarian Church of Montclair.” Although the show is no longer in production, it is archived on the TV34 web page.

A memorial service, tribute and celebration of Lauretta Freeman’s long and meaningful life will take place at a later date for extended family, friends, and colleagues.

The Coop asks that messages of condolence and appreciation be shared on its Facebook page, Facebook.com/montclaircoop.